Poona Kheera cucumbers start out white, turn yellow, and finally brown when mature. They are edible at every stage.

For the last few years I have been growing a variety of cucumber called Poona Kheera, which is an Indian variety that looks more like an elongated potato than a cucumber. They don’t look so delicious, but they have a really crisp, refreshing flavor that is great for slicing and eating. I have been using the same seed packet since 2014, so you can imagine my surprise when this summer, some of my cucumbers popped up green.

I have no idea how this happened. I tried to do a little research on the well-regarded internet, thinking cross-pollination may be at fault, but from what I gather cucumbers will only present mutt-like fruit during the second generation of breeding, not the first. Weird. I guess it is possible a stray seed fell into my seed packet during the packing stage. Or, this plant is a natural cross that happened on the farm and made it all the way to Wisconsin just to be discovered by me! These are heirloom, open pollinated varieties after all. Truthfully, I will never know, but none the less I am taking credit as the Discoverer-on-Record. I present to you….

The fun bonus part in all of this is I now have two varieties of cucumbers to experiment with, and since my Indian variety are for fresh eating, my mystery cucumber is for…PICKLES! Which are my absolute favorite way to strip the cucumber of nutrients, pack them full of delicious salt, and top every sandwich-like food.

I tasted these very traditional-looking cucumbers, and their flavor was bland, to be nice about it. They were crispy, yes, but nothing special. This quality makes them a great candidate for a boiling water bath canner. Cucumbers did well this year, so I have a quite a few pounds of these green mysteries. I experimented with two recipes I found a recipe in the Ball Preservation Book that requires, a dill fermented pickle and one that is described as making phenomenal grilled cheese sandwiches. Umm….SOLD. 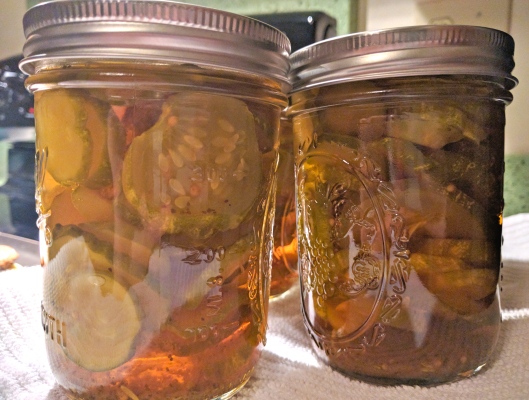 I don’t have reprinting rights, but you can look it up: Cucumber Sandwich Pickles. These are a sweet pickles, and I made 5 pints from 3 pounds of cukes. Because I have little patience for holding out on tasty things, I popped a jar the same day, and we enjoyed a delicious, if not unique, gouda and pickle grilled cheese dinner.

My fermented dills are a true experiment, in that I have never done this before. It didn’t seem too complicated. It called for something called “pickling spice,” which was $4.23 at the grocery store, but the ingredients were all spices I have in my pantry so I whipped together my own mix.

I combined this with fresh dill and 2 garlic cloves, and packed a jar with pickles and topped with a salt solution: 4 quarts water, 1 cup 5% vinegar, 0.75 cups iodine-free pickling salt. To keep the good stuff below the liquid level, I topped it with a brine-filled freezer bag and its now hanging out in my basement. 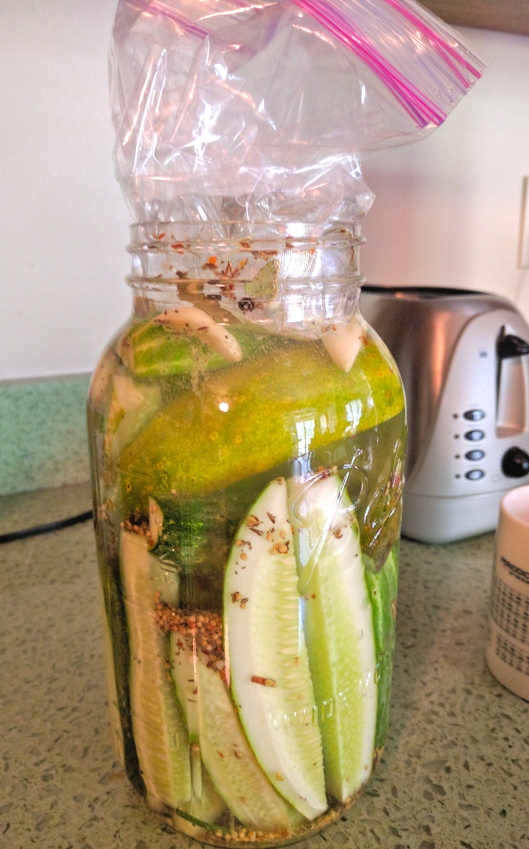